"We always need the human component - being a good human and giving back somehow. A CEC is a way to weave that into the class."

Tracy Hufford paved the way for her community-engaged course to address critical mental health challenges on campus while establishing partnerships to raise awareness in Iowa City. She is a lecturer teaching the Foundations of Event Management course, among others, and the Event Management Certificate Internship Coordinator at the University of Iowa. 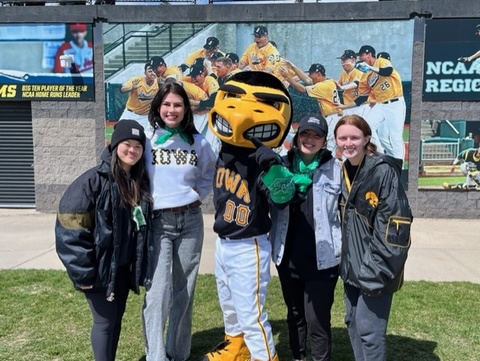 Hufford's class has been operating with a community-engaged component for about six semesters. Hufford begins each new course with an introduction to the Green Bandana Project and an overview of past engagement projects.

When Hufford introduces the Green Bandana Project to her class, she explains that if a student walked in and had a cast on their arm, they would likely say they had sprained a wrist.

"It would be typical for you to say what your physical injury is," Hufford said. "But most won't tell anyone if they couldn't get out of bed in the morning or don't see a purpose in life."

One of the reasons that Hufford continued to support the Green Bandana Project in her coursework was in response to seeing more and more students not coming to class.

"They were great students," Hufford said. "They stopped turning in their work and coming to class, and when I would check in with them almost unanimously, they were having mental health issues."

"I thought if I am seeing that many in my role at Iowa, that has to be the tip of the iceberg," Hufford said. "Sure enough, when I talked to other professors, they saw that too."

Hufford's observation opened the door to having a conversation about mental health with students, which led to an awareness of the existence of the Green Bandana Project and the decision to build outside community partnerships and engage with students on campus to make an impact.

The Green Bandana Project started at the University of Wisconsin in Madison in response to the growing prevalence of depression, suicide, and other mental health struggles faced by students on college campuses. 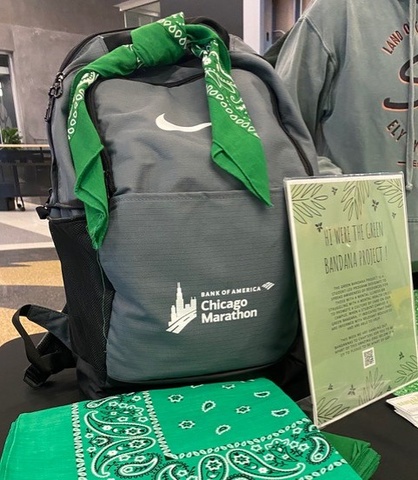 "A student who is either suicidal or suffering from depression mentions that they feel alone and don't feel heard," Hufford said. "They are reluctant to talk about mental health."

In response, Hufford researched the organization while also coping with the loss of her 12-year-old nephew, whose death by suicide had deeply affected her family.

"It was unexpected; he has a picture-perfect family who is still trying to understand it," Hufford said. "Because they are a very communicative and loving family, I realized this can happen to anyone."

Hufford's experience and research converged within her Foundations of Event Management class as students were looking to assist with meaningful events that addressed real needs in the community through community-engaged learning.

"This project just landed in my lap and checked all those boxes of what I was seeing," Hufford said. "That's how I knew it was perfect for my class. Every time I talk to my students about it, they lean in because it is something they do for their peers."

The Green Bandana Project does not ask students to be mental health counselors but to wear a green bandanna, typically on their backpack, which signals to other students that they hear, see, and understand that mental health challenges are on campus. Students also carry a card that lists local resources on campus to assist students experiencing a mental health crisis.

"It's a show of support when students look at the green bandana, which helps them realize that the person wearing it might understand what they are feeling," Hufford said. "We hope that opens the door to them feeling less lonely – the thing that most students cite. Perhaps even a conversation about trouble getting up in the morning, not feeling like myself or that there is hope."

A public relations team in class also reaches out across campus to promote community-engaged events and reach out to professors to help get the word out.

"Professors and staff will help spread the word and wear green bandanas on their backpacks," Hufford said. "It's good for students to see that the campus community supports the cause and the effort for us all to feel healthier mentally."

When approaching the topic of new events and partnerships for the semester, Hufford keeps the door open to new ideas while sharing past successes.

"I say, this is what we've done in the past, what do you want to do, where do you see a gap – how can the Green Bandana Project relate to you or your friends or peers?" Hufford said.

The class then brainstorms for up to two weeks before deciding on a project focus and potential community partners.

In the Spring of 2022, Hufford's class approached Big Grove Brewery in Iowa City to host a 'bags and bandanas' tournament to raise awareness in the community as one of the several community engagement projects undertaken that semester. 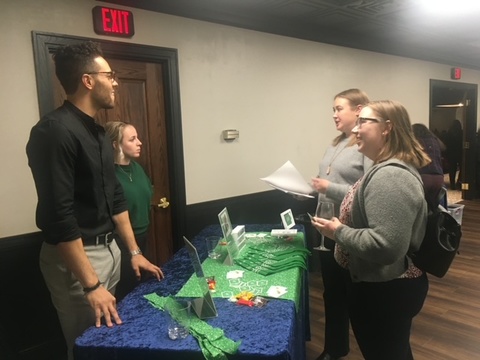 "Big Grove picked it up immediately, and we were off and running," Hufford said.

The Foundations of Event Management class forms community partnerships with supporters to build support and enhance participation from local businesses and nonprofits to amplify their message of mental health awareness and hope.

"This is more than asking for $25 gift cards," Hufford said. "It's about relationships and students explaining the cause and the reasons; it's an excellent learning experience for them."

"Every semester, we put it together with community partners that want to work with us and see it as a good fit for their mantra and culture," Hufford said. "Everybody recognizes this issue right now, not just for college students but everywhere."

A traditional community partnership in event management-based Community-Engaged Courses (CEC) would involve finding a real-life client to 'hire' the class to put on an event.

"When we decided to take on the Green Bandana Project, we didn't have a client," Hufford said. "The students and I reached out to advocates in the community to identify organizations and people interested in this cause to build support for this project."

One project the class wanted to host in the community was a mental health awareness walk in City Park. Hufford's class found and partnered with the law firm Meardon, Sueppel & Downer in Iowa City.

"Meardon Law was one of our first sponsors and was very much on board with the event and wanted to have employees be there to volunteer," Hufford said. "Same with Target, they were first and foremost in having their employees volunteer and participate and help with resources like paying in kind or getting the catering for an event."

Target Corporation, located in downtown Iowa City, also stepped in to provide volunteers. At the same time, MidWestOne Bank has sponsored every green bandana the class has given out.

"Students love engaging with the community," Hufford said. "They know it's a good skill for networking and finding future jobs. When we visit Meardon Law or MidWestOne, I go with them, but they are doing the pitching."

"When my students are coming to pitch something, the doors are open," Hufford said. "We always have a positive experience with our community partners, reassuring us that we are all doing the right thing for the community and students."

Hufford's class continually expressed the goal of sharing the message of mental health awareness through the Green Bandana Project across campus and in area high schools. 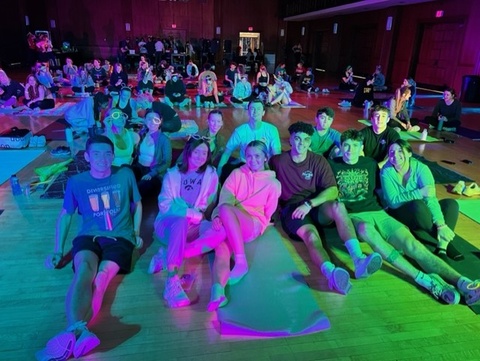 Hufford and her students helped start a Green Bandana Project chapter at West High School in Iowa City, which is now beginning to flourish as of Spring 2022.

"Our most recent partnership collaboration has begun with the CommUnity Crisis Services in Iowa City," Hufford said. "Their new director came from Foundation One in Cedar Rapids who helped fund the Cedar Rapids High School Green Bandana Project."

Hufford knew a West High student familiar with the mental health challenges students were experiencing at the school. Like many high schools, West High had experienced suicides among the student body.

"I saw other high school chapters during my research, and we talked about it," Hufford said. "She wanted to know how to get started, so I told her how we did it, our template, and she started a chapter at West High."

"When I talked to the director about their initiative with the Green Bandana Project in Cedar Rapids, they said many high schools were getting into it," Hufford said. "That was a nod to what we were doing at the high school level that works. The students that started this project at West High came back to me and said they were overwhelmed – they couldn't keep up with the demand for bandanas at athletic events."

"Our students and the high school students threw out the first pitch for a baseball and softball game in Spring of 2022," Hufford said. "Having the overwhelming response at the high school level was great."

ESTABLISHING A PERMANENT PRESENCE ON CAMPUS

Hufford's class also identified that the ability for students to talk to their peers about mental health in an informal setting would be beneficial. 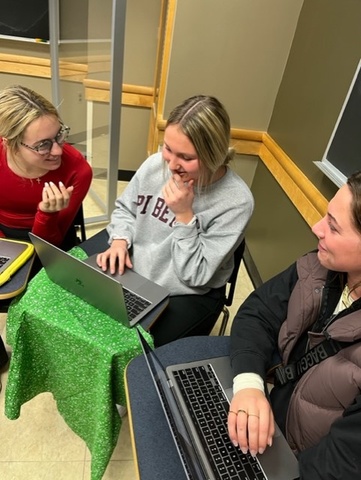 "I met with UI Health Counseling, who increasingly serves a large population of students seeking mental health help," Hufford said. "They supported my students' idea about organizing something on campus so they could meet in groups informally."

When Hufford approached the University of Iowa Counseling Service to learn about services addressing mental health and suicide awareness on campus, the reception was very positive.

"I visited with the head of UI Counseling and mentioned the Green Bandana Project, and there was a light bulb moment," Hufford said. "He mentioned that the Undergraduate Student Government (USG) had wanted to bring the initiative to campus but didn't have the bandwidth to get it done. I said, ok, I'm your person."

In prior semesters, Hufford had worked with the USG to help get the message out to campus partners about the engagement work her students were doing.

"We have their full support and have been a great partner," Hufford said. "For Fall of 2022, we have applied to be an independent student organization, which was an idea from students."

The Green Bandana Project student organization will allow past and future students and the broader campus community to participate in the cause.

THE VALUE OF COMMUNITY-ENGAGED COURSES

"The first thing I learned is you think you are giving something by starting this with students, but in reality, you receive more than you give," Hufford said. 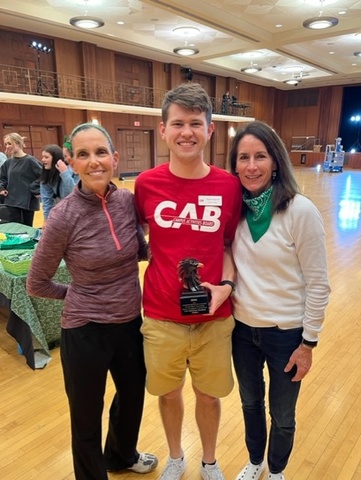 Hufford spoke about how Community-Engaged Courses can seem like a lot of effort at first but become more accessible as the benefits for students and the community come to fruition.

"Why else are we here on campus?" Hufford said. "We always need the human component - being a good human and giving back somehow. A CEC is a way to weave that into the class. In almost every course, you could make a case for something like this."

Student's often express their affinity for applying coursework in real-world applications out in the community.

"They tell me it's great they have engagement opportunities to do along with their coursework," Hufford said. "We still have homework, but I weave this in too. It all fits together to be a great 360 learning experience that is good on multiple levels and planes."

The University of Iowa offers many resources for advice and support if you or someone you know is struggling with mental health challenges or having thoughts about suicide. Please visit mentalhealth.uiowa.edu and counseling.uiowa.edu for more information.

Interested in learning more about Tracy Hufford or the Event Management Certificate offered by the University of Iowa School of Journalism and Mass Communication?